I saw so many bindings and spoke to so many binders in one day; it was sensory overload. It has taken me days to recover.

I started out in Somerville at Sheri’s place (Sheri is my editor), met Sonya Sheats in Cambridge, took the T with her to Boston to see La couleur du vent at NBSS. Sonya has a binding (which she doesn’t like) in the exhibit, but hadn’t had a chance to see it yet (more on that exhibit later). We ran into NBSS binding program director Jeff Altepeter on his way back from a coffee run for Dominic Riley, who was teaching at the school last week. We had arrived just in time for Dominic’s informal lecture about his life in fine art bookbinding. What a nice surprise! Sonya and I were allowed to sit in. 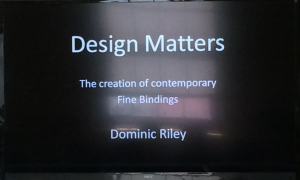 I learned all kinds of interesting things such as: a set of four circle gouges pays for itself (totally obvious if you’ve seen any of Dominic’s early bindings); bindings from York tend to have a darker palette than other English bindings; suede flyleaves take the imprint of anything on the doublure during pressing, offering another design opportunity; and he has read The Hitchhikers Guide to the Galaxy by Douglas Adams, making a reference to Slartibartfast when describing how he had to smooth out the coastline of Africa in order to make a design work. He also described an edge coloring technique Hugo Peller taught him, using both graphite and gilt. I got especially lucky because he described and showed a picture of a binding in Neale Albert’s collection at The Grolier Club that I have personally examined, and he talked about the making of his InsideOUT binding which I saw later the same day.

And now back to our regular programming: binders practicing in the Americas.

I already mentioned seeing Sonya Sheats and Jeff Altepeter. At the InsideOUT reception at Houghton Library I saw Ursula Mitra, met Todd Pattison in person (we’ve corresponded), and met Mark Esser for the first time. I was pleased to see Abigail Rorer, illustrator of both of The Lone Oak Press books represented in the exhibit: Of Woodland Pools, Spring-Holes and Ditches (bound by Coleen Curry, Mark Esser, and Glenn Bartley) and King of the Alps (bound by Lang Ingalls). I was absolutely delighted to meet Simon Eccles, an avid collector of contemporary fine art bookbindings, and the mastermind behind InsideOUT. He was very kind and promised to take a look at this blog. I hope he enjoys it.

I certainly enjoyed seeing InsideOUT and plan to visit again when the room is not filled with people and I can take my time with each binding. It is a completely different experience seeing bindings in person vs. seeing pictures online and in catalogs (more on that later). I’m happy to report that I still love my Cathy Adelman binding after seeing it in person for the first time.

One thought on “My Day in Bindings, Part 1”