I got sidetracked by Brazil.  I was just beginning to talk about teaching lineage, but an exhibition catalog caught my eye:  Latin American Book Arts (1995)  at The Center for Book Arts in NYC.

Brazil is a huge country. But sixteen out of 38 exhibiting book artists from Brazil? That seems like a lot. Is there a substantial book arts community? Where do the binders train? Is it at Associação Brasileira de Encadernação e Restauro  (ABER)? They definitely sponsor competitions. A member of DBOA, Marco Pedrosa, won first prize in 2009. Also take a look at Marco’s prize-winning binding in the 2013 Biennales Mondiales de la Reliure d’Art competition.

After poking around online exhibits, I found several other Brazilian binders. Initially, I was trying to track down some of the binders represented in the 1995 CBA exhibit:

I googled them all thoroughly — I am, after all, an information professional — and managed to trace only one of the four. This binding by Beatriz Ferreira Leal is in the 1996 of L’association Les Amis de la Reliure d’Art du Canada (ARA) exhibition. 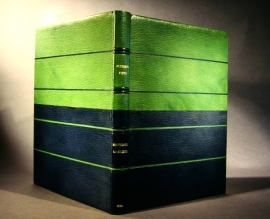 These three binders founded an atelier called Palmarium Encadermaçōes de Arte in 1997. Since 2005 it has been run by Cristina Costa Viana (now Cristina Viana Tenenbaum) and two others: Ilona Wemeck and  Isabel Sewaybricker.

Check out a lovely binding by Cristina Viana Tenenbaum in the 2012 Nobel Museum exhibit, the first Nobel binding competition open to all binders, regardless of country of origin.

Also shown in the online exhibit is a binding by the delightful Sonya Sheats (I’m a fan, so more about her later).